See through your head 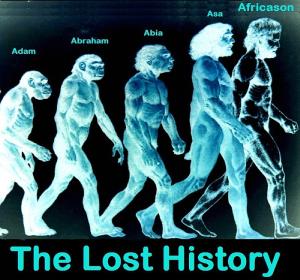 The science of archaeology, paleontology, and genetics has all proved beyond any doubt that human life originated in Africa. They have all shown that the first humans that ever lived have lived in Africa. See using DNA to trace human origin and migration. Then, click through 1-19 to learn.
Yet, western movies, books, continue to present Adam and Eve as whites. Hollywood and cinemas continue casting bible characters as whites!
How could Adam and Eve be white, when human life began in Africa?.
Adam and Eve, or whoever was the first human on earth (whether by evolution or creation) must have looked like a typical African man and woman.
And, since Adam and Eve had children, it follows that their children must have been blacks also. Adam begot Seth, Seth begot Canaan, e.t.c.
Noah must have been a blackman, Moses must have been a blackman, down to Jesus the messiah. Again, note that this is the conclusion of science, not my conclusion. Humanity originated in Africa, and from here we traveled to Arabia, Europe, Asia, South and North America, Australia.
What this means is that blacks have been on everywhere on this planet long before the emergence of any other race. This is why I think those who do racism are fools, because there’s only one race on earth; BLACKMAN. Every other race is just an offspring of blackman.
But, science aside, there’re also multiple biblical verses proving some of these claims. For example, See Jesus Christ was a blackman.
Both the Torah and Bible said Noah had 3 sons, namely; Ham, Shem, Japheth. Genesis 9: 20-27.
Later, Ham grew up, married and had 4 sons, namely; Cush, Mizraim, Phut, Canaan. Genesis 10: 6. Also referenced in 1 Chronicles 1:8.
The map below shows ancient names of northern Africa, Europe, and middle east region. 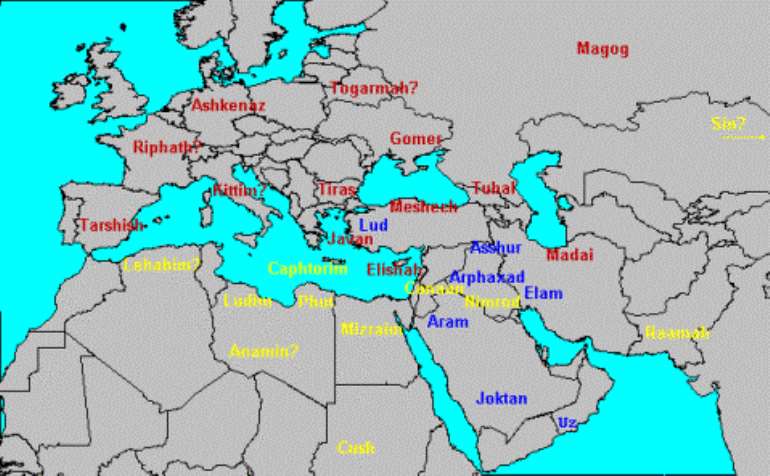 Above were the ORIGINAL names of these lands. And you can clearly see African presence in the bible. But, in order to whitewash the bible, European scholars had to rename MIZRAIM to Egypt and CUSH also renamed Ethiopia or Nubia. This was done to conceal the true identity of the blackman (Ham) who was later to have Judah (Jews)/Jesus Christ/Hebrews as his descendants.
For clarity, below is a map representing Noah's 3 sons and the lands they possessed. 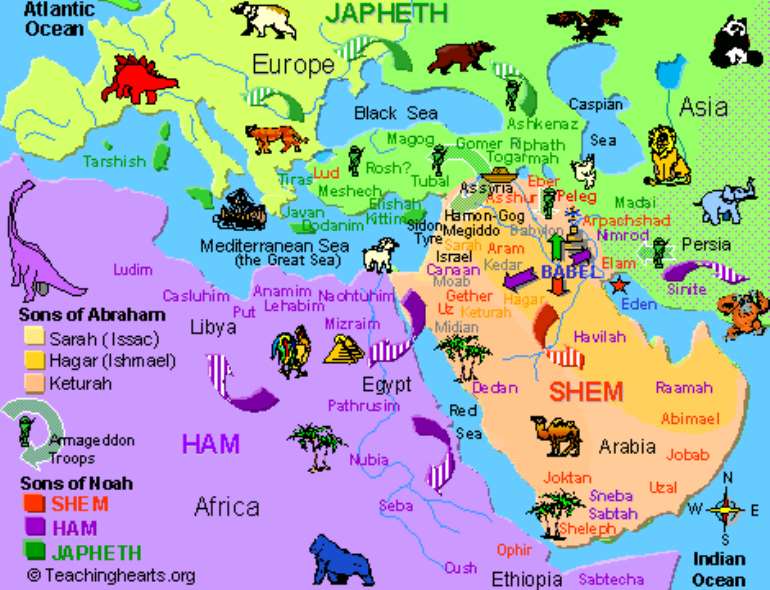 Map of north, east Africa with ancient and current names, and part of Arabia 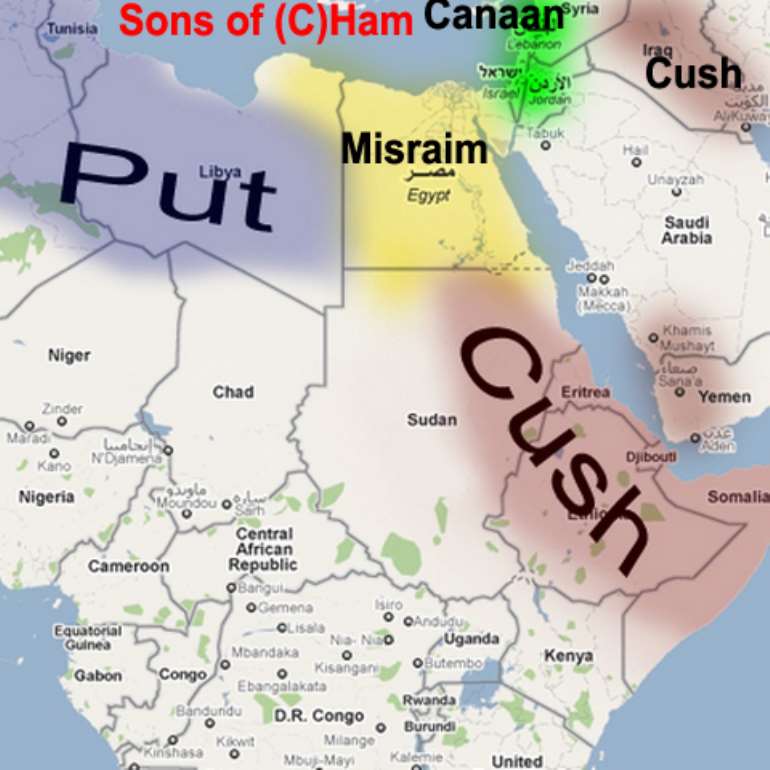 What is a Jew?
The title Jew is really a misnomer. Judah is a corruption of a title of Tehuti
(Djehuty/Djahuti/Jahuty/Jahuteh/Jahutah/Judah). It is this corruption that was used to create the title Judah, Judeans (greek: Ioudians) from which “jew” is derived.
The important thing is that the title of Tehuti that was corrupted from Aprehui or Uprehui into Ibrahuim/Ibrahim/Abraham was also corrupted by the whites and their offspring from Aprehu to Ebrehu, Ebreu, Hebreu, Hebrew. Of course, there was no person name “Eber” from whom the “Hebrews” are descendant. Eber is a fictional character, the name being a corruption of Aprehui.
God …
Solomon – Fictional Character
Solomon, Sheba, and Menelik are fictional characters. The basis of the story is taken from that of Ausar, Auset and Heru in their stellar aspect.
The abode of Ausar in the sky is called “Sah” in Kamit. This is the Orion constellation. Hence Ausar is called “Ausar-Sah”. Yet, Ausar also has a title, “Heri Meht”. (hri mht, in the metutu/glyphs). Heri means “he who is above; chief; leader; king”. Meht means “north; northern territory”. Heri Meht thus means “King or Chief of the Northern Territory”. North Kamit was sacred to Ausar as the place where He was resurrected and made His entrance into the Heavenly realm (Sah/Orion) to function as a God in Nature.
“Heri” (Hri) was corrupted into Hori, Holi, Sholi (the aspirated ‘h’ was sometimes corrupted from ‘h’ into ‘sh’), Soli, and Sol. (There was no ‘l’ in ancient Kamit, only a rolling ‘r’. The ‘l’ came later with the greeks). “Meht” was corrupted into Met, Meh, and Men. “Herimeht” was thus corrupted into Horimeht, Holimeht, Sholimeht, Sholimen and Solimen/Suliman/Solomon.
Sheba & Menelik – Fictional Characters
Auset takes up residence in the star system Sapadet (spd.t), often called ‘Sirius’. The root word “Sapad” (Spd) means ‘to provide’. Auset is thus called “The Great Provider”. She is the Queen of the star system Sapadet, and is therefore known as ‘the Queen of Sapad.t’, or Sapad, which was corrupted into Shabat, Shabad, Shaba, and Saba (Sheba).
Auset, as the Queen of Sapadet (Sheba) also has the title “Rekhit” meaning “wise one” in the language of Kamit. Rekhit was corrupted into “Lekhit” by the whites. The masculine form “Rekh” was corrupted into “Lekh”.
When the constellations Ausar-Sah (Osiris-Orion/Heri Meht/Solomon) and Auset Sapadet (Isis-Sirius/Queen of Sapadet/Shaba/Sheba) unite in the sky, they occasion the appearance of a star called Heru am Tuat or Heru am Spdt (Horus in Sothis). This is the stellar Heru, son of Ausar and Auset. As Auset is called “Rekhit” (Lekhit), this Heru is called the “son of Rekhit (Lekhit)—son of the wise one”.
The term “per” or “pera” means “product of, offspring of” in the
language of Kamit. “Pera Rekhit” thus means, “offspring of Rekhit—offspring of the Wise one”.
Also, “per and pera” meaning “offspring” were corrupted into “ben and bena and ibn” meaning “son/offspring” in hebrew and arabic. In the Kebra Negast, you’ll find that Menelik is defined as “son of the wise one”—“bayna lekhim”. This is a corruption of the Kamau “pera rekhit”. Hence the derivatives—pena lekhit, bena lekhit, bena lekhim, bena lekh, mena lik, menelik.
God …

Allah – Fictional Character
One of the titles of Ra is “Ra Ur”, meaning among other things “Ra, the Great One”. This title “Ur” as well as the female equivalent “Urt” was a title conferred upon many Deities and great Ancestresses and Ancestors in Kamit. E.g. Heru Ur, Amen Ur, Urt Hekau.
One of the most important linguistic perversions of the whites and their offspring was to translate the title “UR” into “UL” which also becomes “EL” and “AL” as well as “L”. This is the proper derivation of the so-called hebrew “El” and arabic “Al” or “L”.
“Ra Ur” or “Ur Ra” became “UL LA” and “AL LAH”. Rait* or Rat Urt and Urt Rat became “UL LAT” or “AL LAT”. Note that some muslims spell and pronounce Allah as ‘Ullah’.
[Rat or Rait is the “Creatress” while Ra is the “Creator”. Together, They function as one unit to Create the World.]
God …

Muhammad – Fictional Character
Muhammad is another fictional character created by the whites and their offspring.
The God of the Nile in Kamit is called Hap or Hapi. He is the masculine Spirit operating through that body of river water. Hap is the longest river in the world. The Deity Hap was recognized to have twin aspects. As Hap flows through the southern part of the country He is called “Hap Reset” meaning “Hap of the South”. As Hap flows through the northern part of the country He is called “Hap Meht” meaning “Hap of the North”. The word for water in Kamit is “mu”.
“Mu Hap Meht” is a title of Hap, meaning “waters” (Mu) of the “northern Nile” (Hap Meht). This is an ancient title of Hap, used for thousands of years by the people of Kamit. This title was corrupted by the whites into Muhapmed and Muhammad.
It very rarely rains in Kamit, therefore the people are dependent on the flood of the river (Hap) for their survival, and a life of tranquility/peace. The coming of the inundation of the nile (flood of Hap) was occassioned by a celebration every year. This celebration continues today and is called the “Night of the Drop”. It is said that from the Eye of Ra (the star Auset-Sapadet/Sirius) a Divine tear drop falls, which causes the swelling of the Nile/Hap every year.
This is why Hap Meht/Mu Hap Meht also has the ancient title “Sarem”. “Sa” means “shrine or sanctuary of a God or Goddess”. “Rem” means “tear”. “Sarem” is a title of Hap meaning the river Hap is a “shrine/sanctuary of the Divine tear (rem) of Auset-Sapadet”.
This title “sarem” was corrupted into salem, salm, isalm and islam by the whites and their offspring. (Understand that ‘r’ and ‘l’ are interchangeable linguistically. In Kamit as well as the derivative Akan language there is no ‘l’, just a rolling ‘r’. All words with ‘l’ in them are translated in both languages, and pronounced, as rolling ‘r’) This is why it is said that Mu Hap Meht (waters of the Northern nile/muhammad) brings Sarem (islam) to the people.
When the river floods its banks, It creates a tremendous lake about 600 miles long and 10-12 miles wide in certain areas. It appears from the ground that when Ra (God) sent MuHapMeht (muhammed) into the country, MuHapMeht and Sarem (muhammad and isalem/islam) overran the country (with water).
As Hap was sent at the end of the year, to start the beginning of a new year and new agricultural season, he was seen as the “last messenger of God” (Ra and also Rait–Rait is the Goddess/Creatress of the World—Ra is the Creator). Mu Hap Meht was the type and figure of a saviour and comforter in Kamit for thousands of years. Again, this info was co-opted by the whites and their offspring when manufacturing their fictional character.
God …

Bilal – Fictional Character
Bilal is none other than the ancient God Baal (Bel). In Kamit, Baal is a form of Set. He is called Bar. “Bar-Ur” (Bar the Great) became Bal-Ul, Bel-Ul and Bil-al.
Set is the God of the desert in Kamit amongst other things/functions. The deserts are just outside of the fertile plains of the nile valley. This is why when Muhapmeht (waters of the northern nile) floods the nile valley, the very first land that is flooded outside of the nile valley are the deserts. I.e., Bilal (Bar-Ur) the Ku te/Ethiopian/Black-Red individual/Desert was the first “convert” of Muhammad. Bilal being “burned” in the desert sands, etc., etc. is nothing more than an allusion to the fact that we are talking about Set (Bar) the God of the Desert.
God …

Yakub – Fictional Character
The divinity Qebh in Kamit was the basis of Iah-Qebh or Yakub. Qebh is one of the titles of the God Kunwem (Khnum; Khnemu) who is often shown as a ram-headed Deity fashioning the soul of the person on a potter’s wheel. The name is spelled Khnm in the metutu. Egyptologists didn’t understand how to pronounce it, so they often write in Khnum, Khnem, etc. In the Twi language of the Akan, the name for a potter is “okukunwem-fo”. The -fo is a suffix denoting plurality. Oku-kunwem, is the name Kunwem (Khunwem/Khnem) from Kamit meaning potter. All you have to do is look at the languages and trace their origins to the Metu Ntr (heiroglyphic) symbols and their meanings.
Again, Iah-Qebh/Iah-Qeb/Yah-Qeb/Yah-Qub/Yah-Kub/Ya-Kub is a fictional character. As you can see the title became distorted and the stories became corrupted over time by the Caucasians and Arabs. These people did not exist.
God …

Revelations
I know many people whop would benefit greatly from these revelations and many who would turn a blind eye to them!
at April 01, 2017 1 comment: 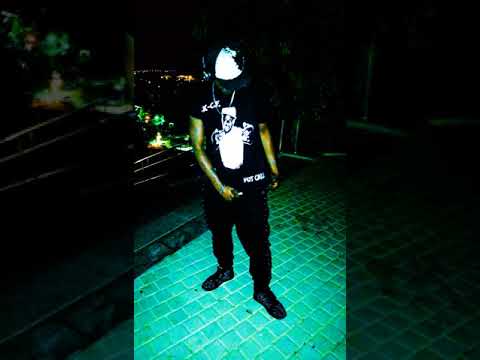